Desire and the De-hydration Station

Have you ever noticed that the moment you realize you cant have something, you want it even more?

A shift in thinking takes place from previously feeling somewhat ambivalent about said desire to feeling like you cant go on without it. If you have been following along since my inaugural post for the iRUN blog contest, you know that  the desirous object of mention, for me, is alcohol. For anyone who doesn't know my history, I am a past drinker with  two years and four months sobriety to my name. I run instead of drinking.

Last Sunday, I ran the Goodlife Toronto Half Marathon and the object of my usual want and desire took a back seat.

My coach, Greg advised me to take it easy on the course as my training was in a phase of rebuilding and had not been speed driven. I had no problem with the plan as I knew I was going to at least be running faster and more freely than the slow training runs I had been doing.

Typically for distances greater than 10k, I use a hydration belt. For this race I decided against the belt as it feels cumbersome and restrictive around my waist and I just wanted to feel light and free. I also reasoned that I was not going to be aiming for a personal best, so it was fine to be losing a bit of time using the hydration stations on the course.

Even with an 8:30am start time, the day was quickly heating up and the sun's UV rays could be felt. I wasn't concerned because I knew I wasn't going to be pushing myself hard in the race. Approaching the first water station, I planned to grab and go and not to worry about the extra time it took to dodge people and flying cups(I am, after all, an experienced bar girl). I was surprised when I realized that runners were at a full stop and even worse, had formed a line to get a drink. As I looked closer, I saw that each cup was being filled and given to the waiting runner. I was immediately reminded of "last call" at the bar, same scene, different vice, but in this case I'm not leaving a tip. If I was concerned with time, I would have flashed some cash to get served quicker. 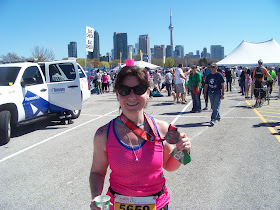 The station was wiped out of pre-filled cups and the volunteers were working frantically to pass out water, but the demand was too great for them to get ahead. So, one by one we got our fluids and moved on. Many people seemed frantic;checking their clocks and speeding away.I was fine. No pressure to perform today. I was just along for a great Sunday run.

Each station I came to had the same problem with back log. Again, I handled it without getting anxious. As the kilometers passed by, so did the time of day, bringing the sun higher in the sky making it hotter on the course. With heat comes perspiration, and with perspiration comes dehydration. A strange thing happens when you run far, you can feel on top of the world and in a flash, something changes and you feel like you might not make it. That happened to me around 16k. I came around a corner, smiling and feeling great and by the time I had run 100 meters in the new direction, I was feeling, a bit lightheaded and chilled, my legs were heavy and I was dying for a drink. I spotted a guy in front of me with a water belt on and I was considering whether I could lift a container without him noticing. I further considered just asking him for one, counting on the idea of a running brotherhood and no runner wanting to see another suffer, but I didn't. I saw spectators with bottles of water. I considered snatching one form their hands as I ran by(I once did that with a bottle of beer, to an unsuspecting dude in a bar). I didn't do that either. Obviously I was not desperate enough for a drink, as I did not lower myself to stealing from my fellow man, but water was all I could think about.

At 17k there was a water station and I didn't care how long it took, I stood in line for a second cup.
The symptoms of dehydration do not just recede with a cup or two of water, so I still felt heavy and chilled, thankfully there was no nausea, so I knew I would be fine. The 19k mark offered another chance to hydrate, and the line up situation there was even more pitiful. The volunteers had by passed filling the giant bucket with water and scooping from it, to filling cups directly from the hose!

I finished the race with a time that is far from my best, but given my training stage, the lack of pressure I put on myself to perform and the hold ups at the hydration stations, I accept my results humbly.
What I have learned is that I will be wearing that stupid belt whether I am taking it easy or running hard.
I have handled the constant crave for alcohol, but I can't handle wanting water and not having it.